Nothing to see here, folks.

However, if you are Denni, you know what to do. 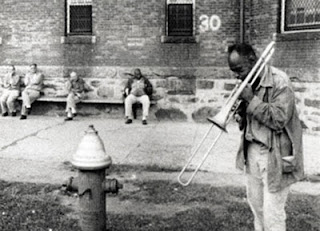 The question arises: if rage makes for great art, can hope do the same?
Posted by James at 11:21 AM 2 comments:

Jeffrey M. Anderson’s website bills itself as “movie reviews for the thoughtful and passionate.” Hearing him talk about his feverish love for cinema, it’s hard to disagree.

“Even today, when I go to a theater, I sit down, and the lights dim, I think ‘this could be the greatest film I’ve ever seen,’” he says.

Anderson credits his first film as Abbot and Costello Meet Frankenstein, a feat he shares with acclaimed filmmaker Quentin Tarantino. “I remember being a little kid, seeing it on T.V., and it really hit me,” he says. “I’ve seen it many times since then, and I still can’t help but love it. It’s very nostalgic for me.”

As someone who gets paid to write about film, Anderson is often asked if he’s less able to enjoy films since he analyzes them so thoroughly. Not true, he says. “Being able to appreciate movies on a deeper level helps you to understand them more. What I really like is to pull out the depths of a film, and I’ve often found that almost any movie has something worthwhile in it.”

However, there’s something to be said about the other perspective as well. “If you go in there knowing nothing about movies, you’re more apt to enjoy something like Transformers, which just infuriated me,” he says, laughing. “But most people just loved it, had a great time, and got their money’s worth.”

“Above all else, when I go into a movie, I look for something personal, and some directorial personality,” he says. “Movies are such a collaborative medium, they’re so expensive, and they rely so much on marketing, testing, and everything else, that the human element tend to get lost. That’s what I look for most.”

Throughout his career, Anderson has interviewed hundreds of cinema’s most versatile personalities, from Mike Leigh to Errol Morris to Claire Denis, including multiple interviews filmmakers William Friedkin, John Carpenter, and David Cronenberg. “I’ve often credited Cronenberg as my favorite living filmmaker,” Anderson says, “but he’s not a guy who, in person, you get where he’s coming from.”

On the subject of speaking to artists he reveres, focus is essential. “It’s really a delicate chess game,” he says. “You go in there, and sometimes there are other reporters in the room, and the only thing they do is disrupt your flow. You have to get a good question in right away, one they haven’t been asked, otherwise they’ll launch immediately into autopilot.”

It’s important to play each situation by ear. “You never know what you’re going to get into,” Anderson says. “Sometimes I prepare for a kind-of playful interview if I think the person’s going to be playful, and you get there and they’re not being playful. You always have to adapt and be ready to try another angle.”

On the current state of film criticism, Anderson has a few key thoughts. “Every critic has their favorite directors and films they look forward to and whatnot, but most critics respond to story above all else, and even more than that, a message of some kind,” he says. “They’re completely opposed to any kind of personality.”

“A great turning point came when I started discovering the French critics,” he ads, “and how they were more interested in artistry and auteurs more than movies-of-the-moment.”

Anderson holds a special reverence for Western director Budd Boetticher, whose ingenuity and style stand in stark contrast to the impersonal methods of many of today’s filmmakers. “[Boetticher’s] films are so spare,” he says. “Every shot just counts, there’s this masterful economy at work, and nothing is overtold. So many movies today assume the audience is made up of idiots and focus on some arbitrary story.”

For him, it all comes back to that personal touch.

“You look at a filmmaker like Brian De Palma, who I like because he’s very true to his own dark impulses. He’s very personal, his movies rarely have that kind of special message that many critics look for, and he has this kind of almost vicious quality. If he disguised all that and made a cuddly film that everyone would like, that wouldn’t be very interesting. It wouldn’t be true.”

Cinematic truth. Nothin’ better than that.
Posted by James at 12:25 PM 1 comment:

I've started and abandoned various blogs in the past, but this one will stick. I swear!

I'll mostly be talking about film, I suppose, but music, politics, and my own lamentable life will surely come up occasionally.